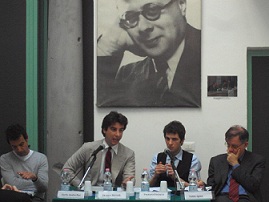 The President of the republic decreed that the Fondazione Circolo Rosselli by legally recognized with an office in Florence, in July 1990, with the motivation that “the aforementioned foundation proposes, principally, to promote, sustain, and facilitate the activities and all the initiatives of the Circolo Cultura Politica Fratelli Rosselli.” Already operating in the years 1920-1924 and successively reestablished in 1944, the Fondazione promotes and provides organized relations with other associations having similar present ends in the national territory, and it collaborates with all the cultural institutions and the public and private entities which recognize the need for close cooperation. The foundation intends to study, understand, and debate the principal cultural, political, economic, and sociological problems that interest modern society and, in particular, those relating to European integration, to Italy and local autonomy, and the state order.

The Circolo Rosselli has a long history in Florence. In 1920 a few young people, among whom were Carlo and Nello Rosselli, Piero Calamandrei, Alfredo and Nello Niccoli, founded in Florence the Circolo Di Cultura for the free exercise of ideas and debate under the teaching of Gaetano Salvemini. One night at the end of the 1924, the office of the Circolo was attacked and devastated by fascists, and it was subsequently closed by the authorities.

Thus began the long fight which saw the youth of the Circolo di Cultura on the front lines, with the publication of the first secret antifascist newspaper “Non Mollare” by the foundation of the movement called Justice and Liberty, for the works of Carlo Rosselli, a theorist of the Liberal Socialist Party, of the two brothers Carlo and Nello who were assassinated in Bagnoles de l’Orne in France on June 9th, 1937 for the establishment of the Partito d’Azione.

It was the Florentine Partito d’Azione that reestablished the Circolo di Cultura Fratelli Rosselli in the autumn of 1944, after the liberation of Italy. The first president was Piero Calamandrei and the Circolo assumed the name Circolo di Cultura Politica Fratelli Rosselli. Since then it has been consistently and continuously active, and influxes of youthful energies have reinvigorated it many times.

Among the Circolo’s presidents were Enzo Cheli and Giorgio Spini. Currently Ricardo Pratesi presides over the Circolo.

Program Guidelines of the Fondazione

The Fondazione has two fundamental aims. The first is to sustain the activity of the Circolo di Cultural Politica Fratelli Rosselli, an associated organization that reached 450 members in 2007, who are quoted regularly in the Quaderni, who participate in the activities of the Circolo, and who will elect the governing bodies and have the right to receive the quarterly review for free.

The second is to study, debate, and deepen the understanding of the problematic institutions of our country in the context of Europe. The study of the problems of local autonomy and of the problems of the full actualization of the framework of the state assumes particular importance in the Fondazione.

The environment, the problems of the ecosphere, and the relationship between climate change and the defense of forests are another area of scientific development of the Fondazione.

In addition, the problems of the city of Florence, and, in general, of the metropolitan areas, constitute a natural outlet for the Fondazione’s commitment, profoundly rooted in the tissue of Florence.

The ideological inspiration of the Fondazione is that of modern liberal socialism, the capacity to join the thrust of personal merits and individual initiative with informed, direct political action in collective solidarity.

The Circolo Rosselli has been present in Madrid, with its own conferences on the progress of Italian-Spanish cultural collaboration, hosted by the Fondazione Pablo Iglesias at its offices, debating the similarities and the differences between the varieties of European socialism.

To Join the Fondazione,

Individuals are able to join the Fondazione Rosselli and the Circolo di Cultura Politica named after the Rosselli brothers.