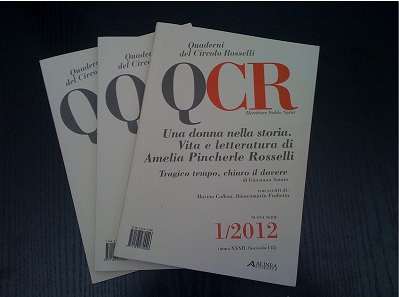 The QCR, currently edited by Alinea in Florence, began publication in 1981 and has reached its 113th edition.

The QCR cover the political and cultural tradition of the Rosselli brothers, institutional issues,  political reform, and economic, social, and cultural problems. The editors dedicate a large space to scientific research, the environment, school and university issues, and to European foreign policy. Scholars, politicians, international experts, representatives of institutions and of society have all participated in the initiatives of the Circolo Rosselli. Giovanni Falcone also held a conference for the Circolo, the actions of which were published in the magazine.

Today the QCR has a meeting space, open to youth and culture, to promote the meeting, the participation, and the exchange between the Fondazione and the city. A place in which people will find new food for thought, authors, and texts that the magazine will cover in the next few years.