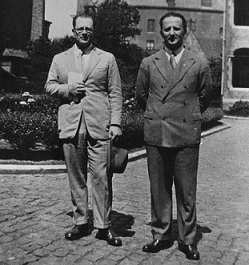 In 1920 some young people, among whom were the brothers Carlo and Nello Rosselli, Piero Calamandrei, Ernesto Rossi, Alfredo and Nello Niccoli, founded in Florence the Circolo di Cultura (1920-1924) under the teaching of Gaetano Salvernin. The Circolo was not a political party, rather a free exercise of ideas, of critical and unprejudiced discussion, deliberately open to the the more varied and current types of thinking and frequented above all by young people, which gathered weekly in the house of the lawyer Alfredo Niccoli; subsequently, in April of 1923, the Circolo had its own official structure and a seat in Borgo Santi Spostoli 27 where, through the initiative of the Rosselli Brothers, was established a large library with Italian and foreign periodicals. Among the leaders of the Circolo, other than Salvernini and the Rosselli brothers,  were Ernesto Rossi, Piero Jahier, Piero Calamandrei, and Enrico Finzi.

In the era of fascist violence that followed the crime of Matteotti, the Circolo di Cultura, which had taken a decidely anti-fascist stance, was devasted on the 31st of December 1924 and its materials destroyed. A few days later, with a prefectorial decree dated January 5th 1925, the Circolo di Cultura was closed. Thus began the long fight which saw the youth of the Circolo di Cultura on the front lines, with the publication of the first secret antifascist newspaper “Non Mollare” with  the foundation of the movement  ‘Giustizia e Libertà’ for the works of Carlo Rosselli, a theorist of liberal socialism, assassinated on June 9th 1937 in Bagnoles de l’Orne in France with his brother Nello for the formation of the Partito d’Azione.

The Circolo was reestablished in 1944 and is still open.